Reimagining the world of architecture with SolarSkin

Solar powered solutions have become more and more an integral part of public spaces. Arrays that people can actually interact with — and see themselves the benefits of renewable energy — have the power to elevate community life and demonstrate a divergence from harmful fossil fuels. As architects are encouraged to find solutions that are sustainable and innovative, the bounds of solar are shown to stretch farther than ever before.

No longer are designers merely incorporating solar panels on top of buildings. They are finding ways to craft visuals that meet both the performance needs of the best panels, and blend in with the current aesthetics of its structure. Solar-powered buildings offer the chance to take part in the most sophisticated and modern designs of the future, which have involved PV cells in the roofing, windows, and even the walls of new buildings. Solar’s application in the built world is being challenged and stretched like never before. We highlight seven of the most creatively-implemented solar structures to date, and envision ways in which SolarSkin raises the bar when it comes to architectural solar, as well as making it more universally applicable.

The Hanwha Group of South Korea, which develops comprehensive sustainable energy technologies, envisioned their headquarters to better reflect their position as the world’s third largest producer of solar panels.

Along came Dutch architecture firm UNStudio, which in 2014 won a competition to retrofit the building in Seoul to incorporate solar panels on its facade. What resulted was an architectural feat of the modern era, demonstrating the possibilities of solar in urban spaces.

SolarSkin has already demonstrated its feasibility with custom-solar facades, so for similar ventures like that of the Hanwha Group, there is no shortage of possibilities. The building in Seoul could be clad with solar panels of any color or design, taking this innovative installation a step further.

Mount Sinai Kyabirwa Surgical Facility has recently been adorned with solar panels, making it a self-sustaining architectural feat. Not only that, but the material and labor was locally sourced, which supports the local economy as well as renewable technologies. The facility, meant to serve areas lacking sufficient resources to surgical treatments, takes inspiration from its natural surroundings, incorporating a natural ventilation system. The architectural firm responsible for this installation also “thought of solar panels as leaves of banana plants gathering sun and providing shade.”

Even the steel framework is emblematic of nature, with supports stretching out like the branches of trees.

This project is important in many ways — for supporting sustainable infrastructure, local economies and communities — and once again proving solar’s extensive applicability in the modern era.

This style of solar implementation is brought to another level with SolarSkin, which increases solar project viability by creating brand exposure in a unique way, as well making solar highly customizable and specific to the community it serves. Additionally, the nature-inspired component of these projects can be brought to another level with SolarSkin designs.

Solar can represent our world in more ways than one — the natural features around us, local traditions and history, even our favorite football or basketball teams. The latter will soon be a reality in Los Angeles, where infrastructure firm AECOM has designed a spectacular solar array for the LA Clippers basketball team. The diamond-shaped metal panels will cover the Inglewood Basketball and Entertainment Center, which includes an arena as well as training facilities, offices, and other public spaces and shops.

Built to “create a landmark facility that exceeds current environmental standards,” the complex is also expected to generate hundreds of millions in economic activity for Inglewood. Much of this will be able to support development in the community’s schools, parks, and other public spaces. Once completed in 2024, the Clippers campus is expected to achieve LEED GOLD certification, one of the highest scores for commercial energy efficiency.

This architectural solar array is expected to be built in a way that allows for natural light inside the arena and other spaces. With SolarSkin-equipped panels, the facility gains another asset. Skins that showcase the Clippers logo, as well as their commitment to sustainability, could bring even more positive attention to the facility. Businesses and companies could also have the chance to advertise their support of the team, as well as renewable energy.

Next generation of environmental leaders immersed in solar architecture

The presence of solar in public spaces has the potential to inspire the next generation of environmental leaders. The sentiment is put into action at the Nature & Environment Learning Centre in the Netherlands, a space is meant to educate children on issues of sustainability. Its inventive exterior reflects these values that are cultivated within.

The design shows the union between visually stunning architecture and the environment — with sustainably sourced materials and structure and embedded solar panels.

While the panels make obvious the building’s energy-neutral status, among other things, it is now so easy to imagine SolarSkin’s potential to transform such projects. 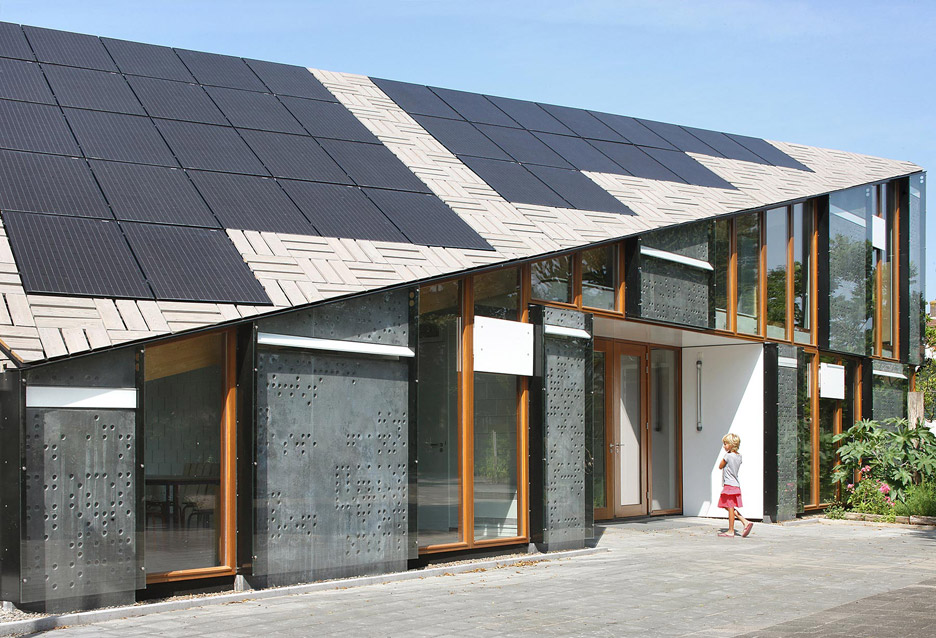 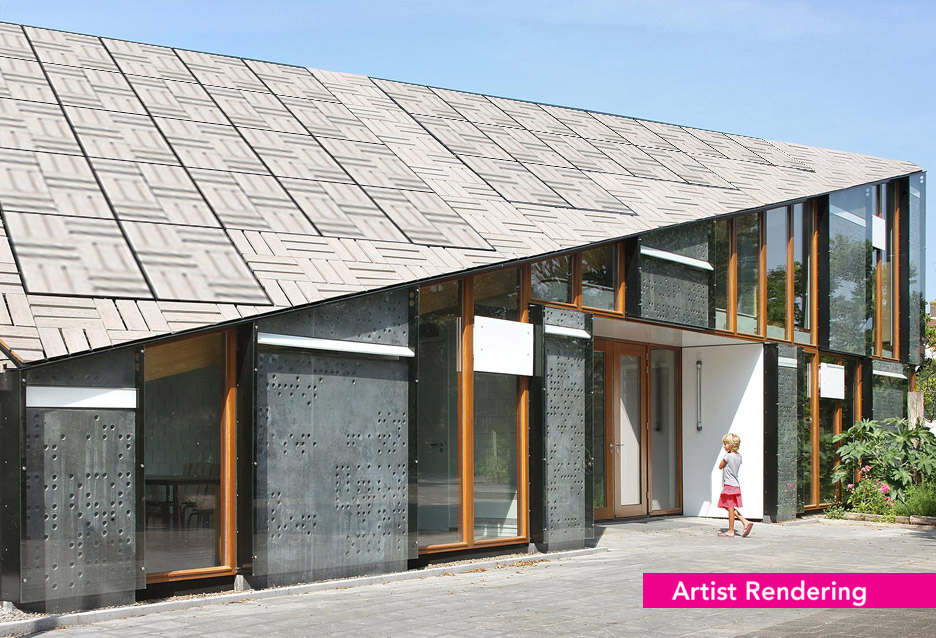 World Cup array has the chance to dazzle

Back in 2013, Brazil made international headlines for its installation of a 1.4 MW solar array atop a stadium ahead of the 2014 FIFA World Cup. Rather than energy be consumed by the stadium, the system allows solar power to produce electricity that is fed right back into the grid. 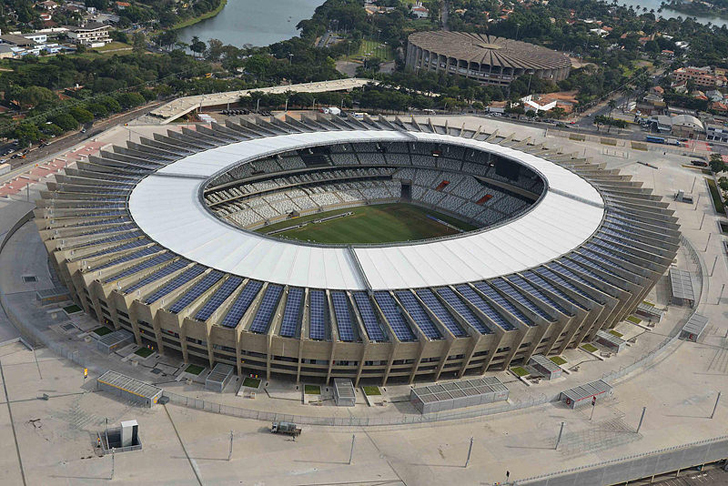 Like the LA Clippers stadium above, this venue has boundless potential when it comes to solar branding and advertising with SolarSkin. While the stadium attracts tens of thousands of fans for invigorating games, it can also dazzle with its 6,000 panels showcasing vibrant images and graphics.

Speaking of international games, the Olympic Committee’s headquarters in Switzerland once again received headlines for its innovative coupling of architecture and sustainability. Its LEED Platinum certification and other architectural honors have officially made it one of the most sustainable buildings in the world, boasting the low carbon emissions and conservation that all lead to a healthier environment.

This holistic approach to the built environment impacts all areas of its energy usage - electricity, water collection, thermal control, and more. The solar display above signifies a dove, and with SolarSkin these artful implementations of solar are all the more feasible.

An Italian architecture firm aided the city of Genoa in rising from the ashes following the fatal 2018 collapse of the Morandi Bridge under heavy rain. The newly constructed bridge, a result of 15 months of non-stop work, represents a much-needed infrastructure change as well the architectural feats of the modern era.

Integrated solar panels run along the deck’s edge, producing enough energy to run the bridge’s lighting system, among others. The bridge’s safety and maintenance is now monitored by robots, which are able to collect data that would indicate joint expansion or other potential issues. SolarSkin’s universal compatibility with existing PV modules has the capability to bridge much needed positive-attention to such projects. In public spaces, art, advertising, or other visuals have the opportunity to flourish and enhance projects such as these.

World Cup array has the chance to dazzle

Within the past decade, solar’s integration within architectural projects has come a long way, and the prospects of the future are even more exciting. Now, new building construction is more apt for sustainability as well as structure, inspiring the public with this more holistic view. SolarSkin allows the world to be envisioned through this lens. Check out more significant architectural projects, and the many ways you can imagine how SolarSkin would transform them. 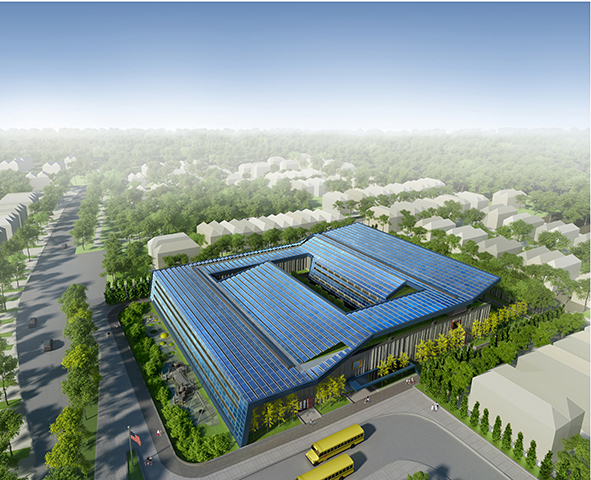 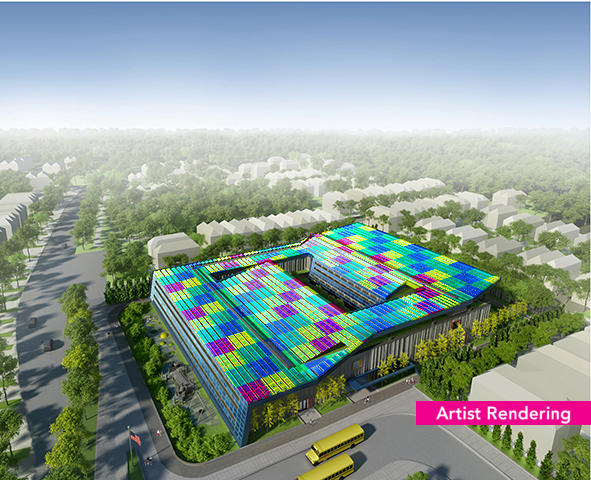 The Kathleen Grimm School for Leadership and Sustainability in Staten Island, NY

The Endesa Pyramid in Barcelona, Spain 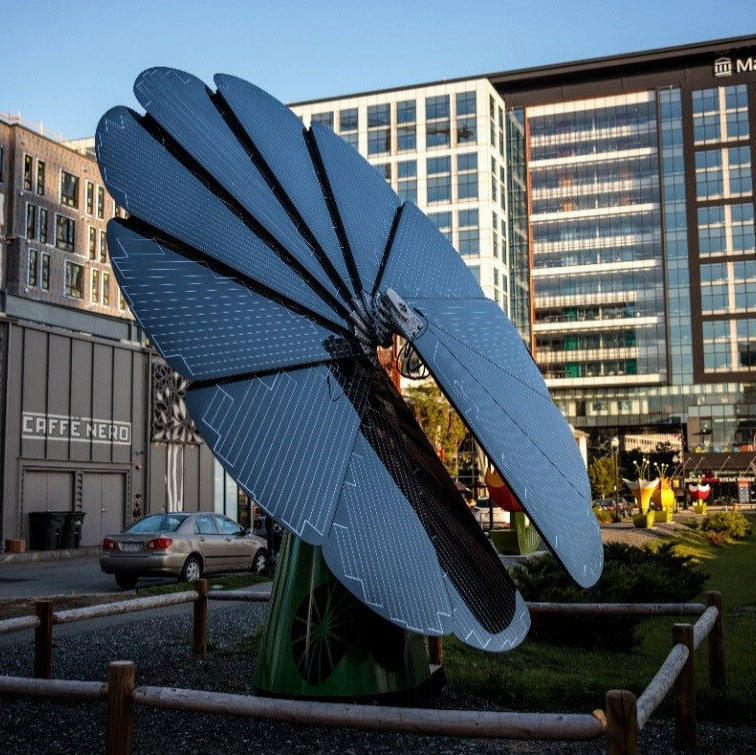 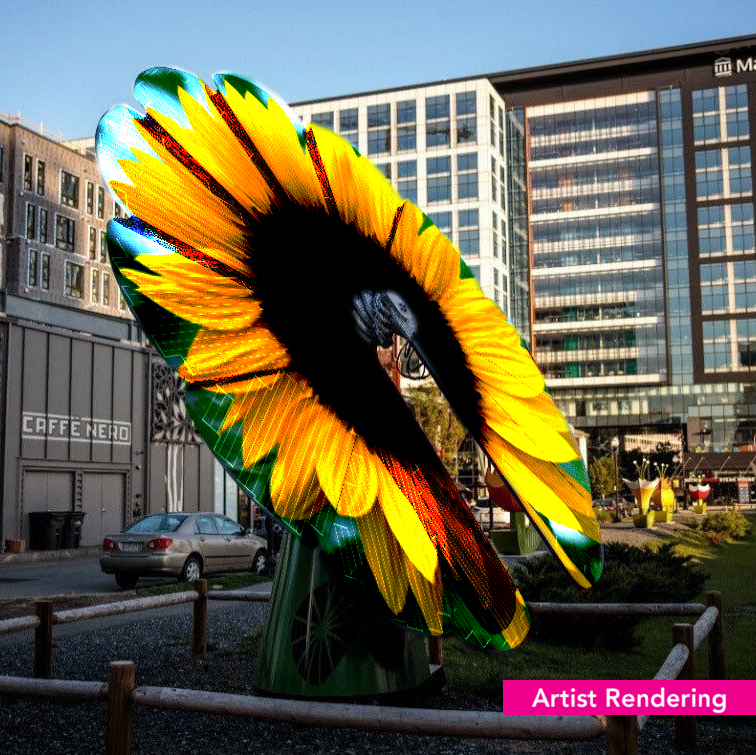 A ‘Smartflower’ at Boston’s Assembly Row

For more information on SolarSkin’s power to transform your commercial project, step here.

How innovative brands can use SolarSkin to achieve their sustainability goals